Kadokawa Shoten’s Sneaker Bunko imprint announced that sales of both the regular edition and the DVD-bundled limited edition of Gakuto Mikumo’s ninth Bibliotheca Mystica de Dantalian (Dantalian no Shoka) novel have been cancelled “due to various circumstances.” The ninth novel volume was slated to ship next January. 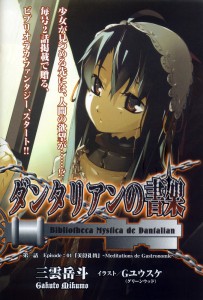 Mikumo explained in a Wednesday blog entry that the main reason for the cancellation was his disagreement with his editors’ desire to extend the series. He had planned at the end of last year to end the series in the eighth volume, and he had reached an agreement with the editors. Mikumo then said that he suddenly received a request from the editors to extend the series this past spring. He emphasized that the disagreement had nothing to do with the anime adaptation since discussions happened before the anime started. He added that there are no plans at this time for new Dantalian no Shoka novel material from Sneaker Bunko.