Pictures of bags that will be distributed at the Dengeki Bunko Autumn Festival 2011 event on Sunday have revealed that an anime adaptation of Reki Kawahara’s light novel series Accel World has been green-lit. The bags also reveal that Kawahara’s other light novel series, Sword Art Online, has an anime as well. 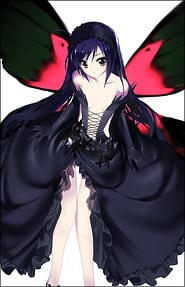 The “future teen” story revolves around a bullied middle school boy named Haruyuki. One autumn day in 2046, he has an encounter with Kuroyukihime, the prettiest girl in his school, that changes his life. Through a mysterious piece of software from Kuroyukihime, Haruyuki learns of the existence of the virtual “Accel World.” In that moment, the lowest of the “school caste” becomes “Burst Linker,” a knight defending a princess.

Kawahara launched the light novels with illustrations by HIMA in 2009, and Kadokawa Group Publishing released the eighth volume in June. The series earned Kawahara the top award in the 15th Dengeki Novel Prizes. Hiroyuki Aigamo has been drawing the main manga adaptation in ASCII Media Works’ Dengeki Bunko Magazine since last year, and Ryuryū Akari has been drawing the Accel World. manga spinoff in the same magazine since last year also. Kadokawa’s Dengeki Bunko imprint has scheduled a 2:00-2:40 p.m. event at Sunday’s festival to announce new works in different forms of media.