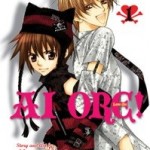 The manga centers around two teenagers: Mizuki, the female “prince” of her all-girls school and the lead guitarist in an all-girl rock band, and Akira, the male “princess” of his all-boys school. Akira want to join Mizuki’s band Blaue Rosen when the band’s lead singer moves overseas, but first he has to overcome Mizuki’s suspicious misgivings