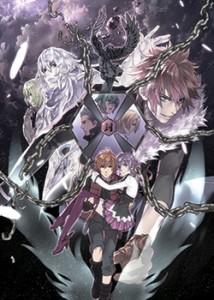 Aquarion Evol will take place 12,000 years after the first Aquarion television series at a city modeled after Hong Kong. A new cast of characters, piloting a new Aquarion robot, will fight enemies from another dimension. Kawamori has hinted that the characters might be reincarnations of Apollo, Silvia, and the other characters from the first series.

Plans for the television anime, the newest title in director Kawamori and Satelight’s Aquarion robot anime franchise, were revealed in February. The Aquarion Evol anime series will premiere with a one-hour special in Japan on January 8, 2012.