The wraparound jacket band on the second volume of Akiyoshi Ohta and Munyū’s Asa made Jugyō Chu! school romantic comedy manga is announcing on Tuesday that an anime adaptation has been green-lit. More details will be announced in Media Factory’s Monthly Comic Alive magazine, where the manga launched in 2008. 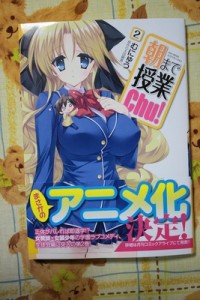 The story revolves around Yūki Kagami, a boy who enrolls in the academy of his dreams as a honors student — and is mistakenly put in the girls’ dormitory where boys are prohibited. Faced with the possibility of having to leave the school, Yūki has to dress up as a girl in the dormitory. On top of things, he ends up rooming with the female teacher Ayana Kakinozaka, who has to watch over him.