The September issue of Houbunsha’s Manga Time Kirara Carat magazine is announcing on Thursday that a television anime adaptation of Kaduho’s Baby, Please Kill Me! (Kill Me Baby) four-panel comedy manga has been green-lit. The manga follows Sonya, an assassin girl who goes to school between missions, and her fearless yet not-so-smart friend Yasuna. Joining them is Agiri, a ninja in Sonya’s organization. 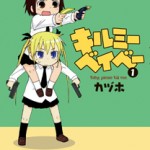