Warner Home Video in Japan will release the Blu-ray Disc of Gisaburô Sugii’s Tōfu Kozō film on October 5 with an alternate ending, among other extras. 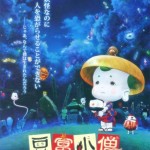 In this computer-animated film, veteran director Sugii (Night on the Galactic Railroad, Touch) adapts a novel by Natsuhiko Kyogoku (Loups-Garous, Mōryō no Hako, Requiem from the Darkness) about a boyish spirit in traditional Japanese folklore.