36-year-old actor Hideaki Ito (Onmyoji, The Princess Blade, Kamui Gaiden) is returning for a fourth live-action film based on the coast guard manga Umizaru by Shuho Sato (Say Hello to Black Jack, The Isle of TOKKOU), and the film will open next July. Brave Hearts Umizaru will adapt the “largest sea disaster” from the original manga: the water landing of a jumbo jet. 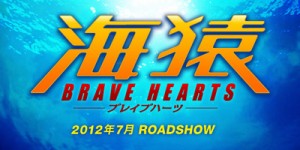 Sato’s manga ran in Weekly Young Sunday magazine, and it follows the lives of divers in the Japanese Coast Guard. In addition to the films, the manga also spawned two television drama series, including one with the same cast as the films. The fourth film is set two years after the last film.The first three films opened in 2004, 2006, and 2010, and the two most recent films were the top-grossing Japanese live-action films of their respective years. After directing the first three films and the related television series, Eiichirō Hasumi aims to start shooting the fourth film on September 17. The official website will begin taking applications for extras on the next film in the middle of this month.