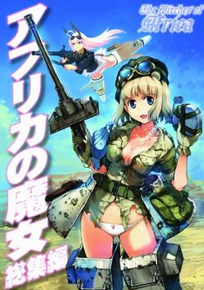 Strike Witches: The Witches of Africa began as a dōjinshi (self-published) manga and text compilation illustrated by Nogami. Fans consider the all-ages work to be “semi-official” due to the involvement of Takaaki Suzuki, a military advisor for the Strike Witches franchise. The story centers around the Witches of Africa campaign of the war storyline first described in Noboru Yamaguchi’s original light novels. Translator Dan Kanemitsu already made the original dōjinshi version of the series fully bilingual for a Japanese/English compilation that was released in May. Nogami personally commissioned Kanemitsu to translate the dōjinshi as he was creating it. Nogami made news last year when he responded to CNN’s article regarding the controversy over the Japanese erotic game Rapelay.