So much for seeing that Dragon Age anime film any time this year…
Or, as it’s now titled, Dragon Age: Dawn of the Seeker has been delayed for an equally-vague 2012 release, according to its official website and first couple of teaser trailers though void of any actual animation, unfortunately. 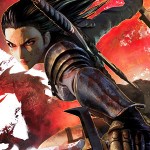 The Dragon Age movie was announced a little over a year ago, as the first anime project (co-)produced through FUNimation’s Original Entertainment team, naturally based on BioWare’s fantasy action RPG franchise Dragon Age – whose first game was released by Electronic Arts in 2009.