English cast for The World God Only Knows Anime

Sentai Filmworks is working through their upcoming January 2012 anime release of The World God Only Knows and today has taken the time to stop by our English Track forum to fill in the fans on who will be handling the English language adaptation. With both seasons licensed, the first season is coming in January under the direction of Steven Foster. Foster has been handling the majority of the recent dubs when it comes to the ADR direction and he has a very familiar and definitely fun cast lined up for it which you can see below. 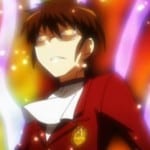 Plot Concept: Keima is a dating sim champion. Cute girls are rendered powerless by his irresistible game playing techniques. Too bad things aren’t that way in the real world. That is, until his tempting game playing causes a real live-and very bubbly-cute-demon hunter named Elsie to materialize! Now Elsie wants Keima to help her free hot girls from sneaky demons who secretly possess them. Rack up the love points with the devilishly fun anime The World God Only Knows!