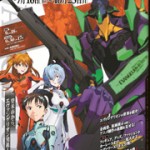 The exhibition will run until October 23. Miyagi Prefecture in northern Honshu was one of the areas worst hit by the Great Eastern Japan Earthquake (Higashi Nihon Daishinsai) disaster of March 11.

The exhibition will cover both the original television series and the recent theatrical reboots. The display will include a two-meter model of the Evangelion Unit 01 robot and a replica of the Spear of Longinus. Visitors can also see original proposals, key frames, screenplays, storyboards, and dialogue recording scripts.