The official Twitter account of the North American publisher Dark Horse Comics revealed on Sunday that there are plans for a FLCL manga omnibus next year. Hajime Ueda adapted Gainax’s video anime series FLCL in this manga, and Kodanasha published two volumes in Japan in 2000 and 2001. Tokyopop released the manga before it shut down its North American publishing operations in May. 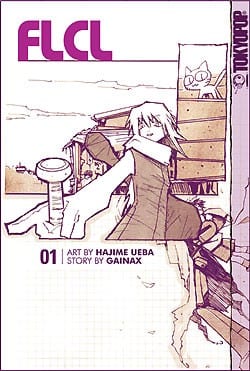 FLCL follows an ordinary Japanese sixth-grader named Naota as he struggles with adolescent issues like his big brother leaving home and his brother’s girlfriend Mamimi making advances on him. His life gets turned upside down when a hyperkinetic woman named Haruko runs him down with her Vespa scooter — and then settles into Naota’s home. Life only gets more surreal as robots and aliens run amuck in Naota’s formerly tranquil town.Funimation released the original anime via DVD, Blu-ray Disc, and digital download earlier this year, and the anime was previously released by the Synch-Point anime label of Anime Gamers (later Broccoli) in North America.