FUNimation Entertainment announced on Friday that it has licensed the eighth volume of the Hellsing Ultimate OVA Series. Funimation will begin production on the series immediately with New Generation Pictures, and Funimation’s release will include the original dub cast of the series. Funimation also plans to release the first seven OVAs starting in 2012. 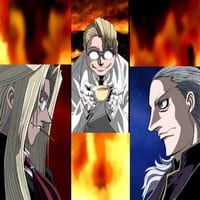 The eighth volume shipped in Japan on Blu-ray Disc and DVD on July 27 with a “petit anime” extra. The staff had previously scheduled the volume for June 22. The anime’s staff cited the effects of the Great Eastern Japan Earthquake (Higashi Nihon Daishinsai) disaster on the already tight production schedule and the desire for retakes as reasons for the one-month delay. The eighth volume of Hellsing Ultimate marks the beginning of the third and final season, which will have three volumes. The studios Graphinica and Kelmadick are animating the third season, after Satelight and MADHOUSE animated the previous ones. (GONZO animated the 2001-2002 television anime series that also adapted Kouta Hirano’s Hellsing manga.) Geneon Entertainment (USA) Inc. once distributed both Hellsing anime projects, but Funimation is now distributing them.