The Hokkoku Shimbun paper confirmed on Monday that the production committee of the Hanasaku Iroha television anime series announced that it is producing a “new visual work” of Hanasaku Iroha next year. The production committee did not specify if the new work will be released on television, on video, or in theaters — or even if the work will be animated. 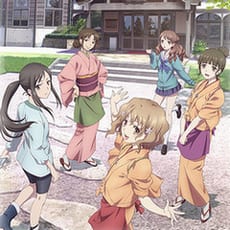 The “Hana-Iro Ryokan Kumiai” committee made the announcement at Kanazawa City on Sunday during the real-life Bonbori Festival — like the one seen in the Hanasaku Iroha television anime. The festival organizers announced that about 5,000 attendees, including both locals and fans, took part in the event. The Hanasaku Iroha television anime series aired from April to September of this year, and Crunchyroll streamed the anime in several countries as it aired in Japan. The story centers around Ohana Matsumae, a 16-year-old Tokyo native who suddenly ends up working at a provincial hot spring inn after her mother flees town to avoid debts.