The October issue of Gentosha’s Monthly Comic Birz magazine is announcing on Tuesday that Hidekaz Himaruya will begin serializing his Hetalia manga in the magazine in the next issue in September. The October issue also has the latest information on the anime adaptation. 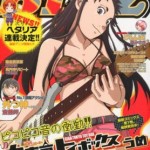 Until now, Himaruya released his manga online. He is also contributing to the first issue of the new magazine Comic Spica from Gentosha. Funimation is releasing the first television anime seasons, the two seasons of the Hetalia: World Series television sequel, and the Hetalia Axis Powers: Paint it, White! film.