The 71st volume of Ohta Publishing’s Manga Erotics F magazine announced on Tuesday that Usamaru Furuya will end his Innosan Shōnen Jūji-gun (Innocent Children’s Crusade) manga in the next volume on November 8. 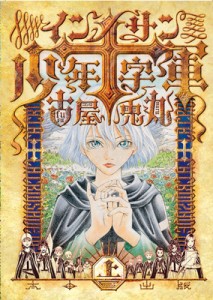 The story is Furuya’s retelling of the Children’s Crusade of legend and lore. In the spring of 1212 in a country town in northern France, a devout, “miraculous boy” named Étienne (Stephen) forms a Children’s Crusade with 12 of his friends. A calling sends the boys on a danger-fraught journey to the distant holy land of Jerusalem. Furuya launched the manga in 2008, and the second of three compiled book volumes shipped last year.

Furuya made his professional manga debut in 1994 with Palepoli, and Viz and Cadence Books would later publish parts of this manga in the books Secret Comics Japan and Japan Edge, respectively. Viz also published his Short Cuts manga and licensed his Genkaku Picasso. DC Comics’ CMX Manga had planned to publish Furuya’s 51 Ways to Save Her before shutting down last July. Vertical is publishing Lychee Light Club and Furuya’s manga adaptation of Osamu Dazai’s acclaimed novel No Longer Human.