A TV anime adaptation based on the Inu x Boku SS manga is being announced this week in the August issue of Square Enix’s Gangan Joker magazine, where said manga has been serialized since May 2009, as well as via an official website that opened yesterday with little more than the charming artwork below. 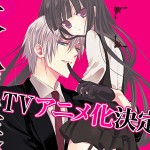 The original supernatural shounen manga is created by Cocoa Fujiwara, and so far it’s been compiled into 5 volumes (the first one released on April 22, 2010). No release date or animation studio is known at this point, so I’ll just leave you with a very, very shy (for now) local gallery, and this here synopsis of the manga’s story courtesy of Baka-Updates.