The staff of the Iron Vendetta (Kōtetsu no Vendetta) military robot anime project confirmed in a Thursday blog entry that the project is on hold due to the dissolution of the production division of its sponsor Ankama Japan. As a result, the release of the anime’s episode 0 is now unscheduled. 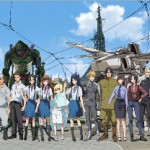 The staff is looking for a new sponsor, and the members are manning a booth at the semiannual Comic Market event — just as they have had since they started the project, before Ankama Japan agreed to sponsor it. The staff members thanked their fans for their email messages of support and expressed their desire to continue with project.