Kami-Usagi Rope, a series of comedy shorts that the Oscar-winning studio Robot animated for screening before feature films in TOHO Cinemas theaters, will itself made be into a film next year. Director and writer Yūji Uchiyama made the announcement on Wednesday during an event to celebrate the release of the anime’s second DVD.

In this anime, a high school rabbit named Rope and his quick-tempered squirrel friend Akira have random conversations as they walk through their working-class neighborhood to the movie theater. 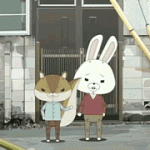 Mariko Shinoda, a member of the all-female idol group AKB48, plays Akira’s sister, and she also appeared at the Wednesday event alongside Uchiyama and animation director Ryōsuke Aoike. The anime’s official YouTube channel is streaming seven of the shorts.