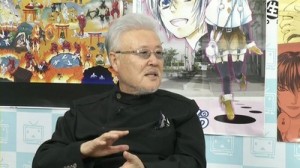 The 75-year-old creator had said in August that he disliked the beginning of Madoka Magica, but added that the anime forcefully won him over. On Monday, he continued his praise, saying that watching Madoka Magica made his “blood boil [with excitement]” and inspired him to want to do something himself. “Will I be competing with Madoka Magica? That’s my challenge at 75!”
Koike explained the concept of Mahō Shōjo Mimitsuki Mimi no QED by noting that with today’s cutting-edge scientific advances such as neutrinos and nano-machines, “what once was magic is no longer magic, thanks to the progress of science and medicine.” He continued, “And so, since the magical world no longer exists, it is a serious matter to send a girl gifted in magic to the human world.” He also addressed the real-life issue of the number of females enrolling in engineering schools leveling off or dropping, and noted that the person who will be drawing his story is a female engineering school student. On his live show, Koike discussed his magical girl story with his guest Takeshi Okazaki, the manga creator and illustrator known for Elementalors and Let’s Lagoon. Okazaki happened to be a disciple of Akira Sakuma, who was a disciple of Koike — thus making Okazaki a “grandson” in Koike’s school of gekiga (manga with serious storytelling) arts. Dark Horse Comics publishes the Lone Wolf and Cub manga in North America, while Media Blasters licensed a Japanese live-action television series based on it. Previously, AnimEigo licensed a Japanese 1972 live-action film version and its five sequels. Both Viz and Dark Horse Comics published Crying Freeman, and Dark Horse Comics also licensed Koike’s Lady Snowblood and Color of Rage.