The North American manga and anime distributor Viz Media announced at its New York Comic Con panel on Sunday that it will publish Yun Kouga’s Loveless and Touya Tobina’s Jiu Jiu manga series. Viz will also publish the new science-fiction novel MM9 by Hiroshi Yamamoto (The Stories of Ibis) in ebook and print formats next January. Viz will release Inuyasha: The Final Act on Blu-ray Disc and DVD next year. 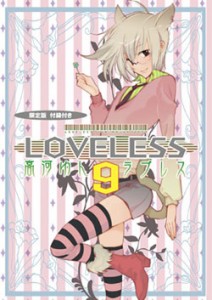 Kouga launched her supernatural boys-love manga Loveless in Ichijinsha’s Comic Zero-Sum magazine in 2001, and it is still to be completed. Tokyopop published the first eight volumes of Loveless, but stopped three years before shutting down its North American publishing operations this past May. Viz will publish volume 9 in June of 2012, followed by volume 10 in October of 2012. Media Blasters released the television anime adaptation of the manga on DVD.

The story of Jiu Jiu follows Takamichi, the heir to a family who hunt monsters in the darkness. She lost her favorite older brother when she was young. Despite being isolated in her grief, she is put in charge of two wolf/human hybrid children. The two are just 3 years old, but they now go to Takamichi’s school in human form.

Tobina launched the manga in 2009, and it currently runs Hakusensha’s The Hana to Yume magazine. Hakusensha will publish the fourth compiled book volume in Japan on October 20. Viz’s volume 1 will ship in July of 2012, followed by volume 2 in October of 2012. Tokyopop published Tobina’s earlier two-volume Clean-Freak Fully-Equipped (Keppeki Shōnen Kanzen Sōbi) manga series.