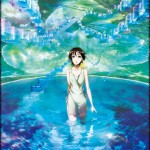 Mardock Scramble: The Second Combustion will open in Japan on September 3. The website already began streaming the theatrical trailer on the same page in June.

In the story of Tow Ubukata’s original science fiction suspense novel series, a teenage prostitute named Rune Balot (Megumi Hayashibara) is murdered in an explosion. However, Dr. Easter (Hiroki Touchi) saves her, and Balot is resurrected as an advanced cyborg. Balot takes on the worst of Mardock City’s criminals as she looks for vengeance.

You can watch the anime’s promotional video along with the two commercials HERE.