May’n, the artist who sang for Macross Frontier, Aria the Scarlet Ammo, and other anime, announced on Tuesday that she will perform her first solo concert in an arena on March 20, 2012. The “May’n ☆ Go! Around!!” concert will be held at the Yokohama Arena south of Tokyo. May’n‘s fan club members will be able to buy tickets early from September 28 to October 4.

May’n held two solo concerts at Tokyo’s Nippon Budōkan stadium last year and this year, and she alsoperformed in joint concerts such as “Animelo SummerLive 2010 -evolution-” at various arenas. However, the March 20 “May’n ☆ Go! Around!!” event will be her first solo concert in a full arena.

She performed overseas in Hong Kong, Taiwan, Malaysia, Los Angeles, and Singapore, and her live events were filmed for this year’s May’n the Movie -Phonic Nation- 3D documentary (pictured right). 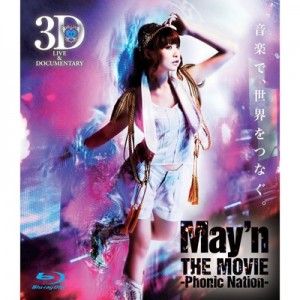