A teaser website announced on Sunday that a television anime adaptation of the Muv-Luv Alternative: Total Eclipse novel will run in 2012. 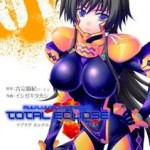 The novel itself is spinoff of the 2006 romance simulation game Muv-Luv Alternative from the adult game company âge.

The novel has been running in Enterbrain’s Tech Gian magazine since 2007, and it already inspired a manga adaptation by Takashi Ishigaki in ASCII Media Works’ Monthly Comic Dengeki Daioh magazine in 2009.