The wraparound jacket band on the first volume of Jun Sasameyuki’s Hanasaku Iroha Green Girls Graffiti manga announced on Friday that a new Hanasaku Iroha anime adaptation has been green-lit for next year. 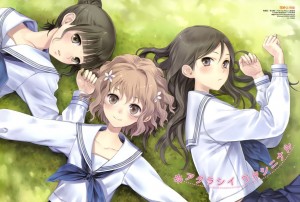 The production committee of the Hanasaku Iroha television anime series had announced in October that it was producing a “new visual work” of Hanasaku Iroha next year, but it did not specify if the new work was animated or not.

The Hanasaku Iroha television anime series aired from April to September of this year, and Crunchyroll streamed the anime in several countries as it aired in Japan. The story centers around Ohana Matsumae, a 16-year-old Tokyo native who suddenly ends up working at a provincial hot spring inn after her mother flees town to avoid debts.