This year’s 48th issue of Shogakukan’s Weekly Shonen Sunday magazine is announcing on Wednesday that an all-new, “truly the last” original video anime project of Takuya Mitsuda’s Major baseball manga will debut in the middle of December. A new OVA volume will be bundled with the first new special compiled book volume (tankōbon) of the manga. 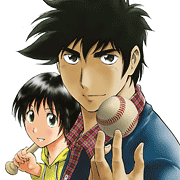 The OVA project will adapt the thus-far-unanimated World Series arc and the story’s illusive final matchup, while the new book will let fans see the last pitch in the manga. The project promises the return of the “Golden Battery” in America. The original manga ended in July of 2010 after a 16-year run. The story follows Gorō, the son of a major league batter who dreams of making it big himself. The manga began in the magazine in late 1994. The manga inspired its first television anime series in 2004, and the sixth television anime series launched last year. The manga also inspired an anime film titled Major: Yūjō no Winning Shot in 2008.