The September issue of Shueisha’s Ultra Jump magazine is announcing on Friday that Koji Kiriyama will end his Ninku ~Second Stage Eto Nin-Hen~ martial arts manga in the next issue on September 19. In the story, a young former captain of Ninku Corps journeys to find other survivors after a devastating war with the empire. The Second Stage Eto Nin-Hen manga has been running in the magazine since 2005. 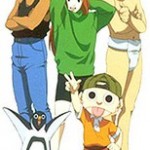 The original Ninku manga ran in Shueisha’s Weekly Shonen Jump magazine from 1993 to 1994. It inspired a television anime series and a film, which Media Blasters released in North America.