On September 28, Sony Pictures Entertainment will release a Japanese Blu-ray Disc of Hirotsugu Kawasaki and Studio Pierrot’s anime film Onigamiden with a director’s cut that add 19 minutes of footage. 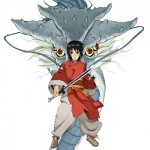