The Japanese production company Aniplex will release the director’s cut of the first episode of the Persona 4 The Animation series on Blu-ray Disc and DVD on November 23. The limited edition Blu-ray and DVD editions, along with the standard DVD edition, will feature the director’s cut of the episode with about three minutes of new footage. All editions of the first home video volume will also include the on-air version of the first episode, as well as promotional videos and audio commentary. 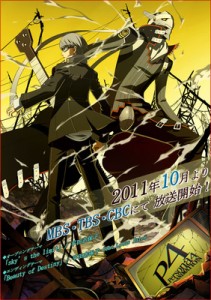 The limited editions will add a bonus extra CD with the full, TV-sized, and karaoke versions of both the opening and ending theme songs. The limited edition will also have a tri-fold case illustrated by original character designer Shigenori Soejima, two exclusive pin-up cards, an exclusive booklet, and a mailaway form for a priority pass to an event.

The anime itself will premiere in Japan in October. Director Seiji Kishi (Angel Beats!, My Bride is a Mermaid) and the anime studio AIC ASTA are adapting the Persona 4 role-playing game from Atlus into this television series. Persona concept designer Kazuma Kaneko, original character designer Soejima, and musical composer Shoji Meguro are reprising their respective roles from the game for the anime.