The third volume of Kadokawa Shoten’s Newtype Ace magazine began serialization on a manga adaptation of Sunrise’s Phi Brain: Kami no Puzzle anime on Thursday. Artist Yoshiki Togawa will be drawing the manga. 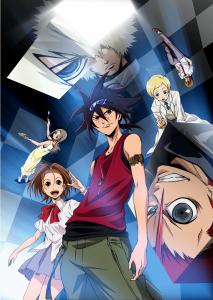 The story of the school adventure story revolves around Kaito, a puzzle-loving freshman at the private high school named “Root Academy.” He is selected as a candidate for “Phi Brain” for his extraordinary mental skills. One day, he and his childhood friend Nonoha tackle the “unsolvable puzzle” hidden in the underground ruins near the school. They are guided by the mobile device given to Kaito by the student council president.

The puzzle is the “philosopher’s puzzle,” a life-threatening creation of a mysterious intelligence group known as “POG.” When he defeats the puzzle, he is designated as a “Solver.” Together with Nonoha and other Solvers, Kaito battles POG at “philosopher’s puzzles” all over the world.

The anime premiered in Japan on the NHK Educational TV channel on October 2. Sentai Filmworks announced it had licensed the anime last month, and it is streaming the 25-episode series on The Anime Network. Togawa previously drew the Cloverfield: Kishin manga, which was a tie-in for Paramount Pictures’ Cloverfield film.