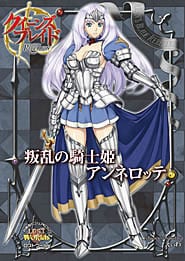 The story is set four years after the first storyline and revolves around Annelotte, the rebelling knight princess who stands up to the tyranny of the new queen. The Rebellion storyline already inspired two prologue original video anime DVDs that are being bundled with the Queen’s Blade Premium Visual Books.