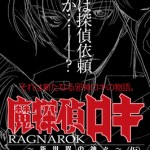 The occult mystery story follows the Norse god Loki after he is exiled to the mortal world in the form of a human child. He must collect auras of evil in order to return to the world of gods, so he runs a detective agency to accomplish this.