The October issue of Kodansha’s Bessatsu Shōnen Magazine is announcing on Friday that a television anime adaptation of Mitsuru Hattori’s Sankarea “zombie moe adolescent romantic comedy” manga has been green-lit. 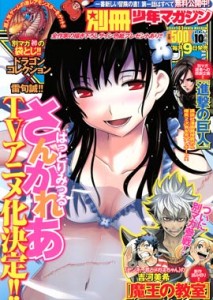 The story revolves around Chiharu Furuya, a high school freshman who is obsessed with zombies. Even his dream is to “kiss a zombie girl.” Through an unexpected set of circumstances, Chiharu gets to know an elegant, pretty girl named Rea Sanka, and together, they try to revive Chiharu’s pet cat Baabu who died in an accident. Chiharu discovers that Rea wants to get away from her many responsibilities by becoming a zombie herself.