﻿﻿The official Twitter account for the Amagami support site confirmed that a second season of Amagami SS was announced at the TBS Anime Festa event on Saturday. The tweet also notes that musical artist azusa (Amagami SS OP1, Astarotte’s Toy ED) will once again perform the theme song. 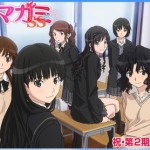 Amagami originated as an all-aged dating simulator released in 2009 for the PlayStation 2. It went on to be adapted into a 26-episode animated series the following year. North American anime licensee Sentai Filmworks announced in May that they acquired the distribution rights to the first season of Amagami SS and will begin releasing the series starting September.

The original plot involved high school student Junichi Tachibana, who is heartbroken after a former girlfriend stood him up before a Christmas Eve meeting. Two years later, Tachibana continues to loath the Christmas season until he considers going out with one of six girls at his school.

The storyline for the second season hasn’t been revealed yet.