The North American anime distributor Sentai Filmworks confirmed on Friday that it will release the Heaven’s Memo Pad (Kami-sama no Memo-chō) anime. 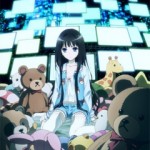 Digital distribution of the series will begin through The Anime Networkon Sunday, July 31 with a video release of the 12 episodes on English-subtitled DVD to follow next year.