Sentai Filmworks announced on Thursday that it has licensed the television anime adaptation of Hinata Takeda’s Ikoku Meiro no Croisée (La croisée dans un labyrinthe étranger) manga under the name Croisée in a Foreign Labyrinth – The Animation. 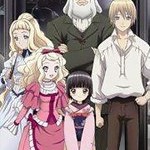 The Anime Network will begin streaming the 12-episode series on July 26, and Sentai Filmworks will release the series on home video in 2012.

The story follows a girl named Yune who arrives in the lower-class neighborhoods of Paris in the last half of the 19th century, when Japanese culture gains popularity in Europe. She ends up working at an ironworks shop with a boy named Claude.