Synopsis: Once upon a time, a maiden came from the heavens to bathe in a stream. Her robe, which enabled her to return to her home, was stolen by a young man who forced her to marry him, beginning a long line of half-human, half-celestials. But just as her blood flowed through the veins of mortals, so did the maiden, Ceres, plot her revenge. To teenage Mikage Aya, something like this would sound like a grim fairy tale, and nothing could be further from her mind as she hangs out with her friends and her twin brother Aki on her 16th birthday. But her family’s deep secret is about to emerge, and in a moment, everything Aya knows is shattered for the lie it is.

Shattered Angels revolves around the life of Kū Shiratori, a seemingly normal high school girl, who enjoys school life in the giant city Academia. Academia is thought of as a symbol of recovery for humanity since already ten years have passed since the greatest disaster mankind had ever seen occurred. Kū has recently been having a recurring dream where a prince meets her and takes her away. One day, while all the students at her school are preparing for the upcoming school festival, the prince whom she has met several times in her dreams appears. The prince, whose name is Kyoshiro Ayanokōji, requests of her just as he had done in Kū’s dreams, “Let’s go, together….”

Kū Shiratori – Voiced by: Sayuri Yahagi (Japanese), Brittney Karbowski (English)
Kū is quite the normal high school girl who feels as if she is drifting through her existence and she always describes herself as being “empty”. She never misses a chance to give letters to the mysterious prince in her dreams and frequently talks to him in her thoughts. In reality she is an introverted girl, believing that she lacks good qualities. She appears to be easily overwhelmed by situations that deviate from her previous experiences and expectations.

Kyoshiro Ayanokōji  – Voiced by: Katsuyuki Konishi (Japanese), Josh Grelle (English)
Kyoshiro is instantly likened by Kū to the prince in her dreams when he transfers to Kū’s school from the legendary Jōtō Academy. He is a refined gentleman, adept in horseback riding, and has a tendency to play the violin while deep in thought.

Setsuna – Voiced by: Yuki Matsuoka (Japanese), Maggie Flecknoe (English)
Setsuna, also known as “Setsuna of the Moment of Dreams,” is the Absolute Angel Claíomh Solais. She fights alongside Kyoshiro as his partner. Setsuna treasures a ribbon bow with bells, which is given to her by Kyoshiro and tied to the right side of her headdress. Rarely expressing any emotion, she is physically beautiful and can carry out every household chore flawlessly, leading Kū to call her a “princess”.

Mika Ayanokōji – Voiced by: Atsuko Tanaka (Japanese), Kaytha Coker (English)
Mika is the ruler of the Higashigetsu Fūma Witch Academy, who is setting forth the domination of all the female students through her right hand, Kaon. She displays signs of jealousy fueled by possessiveness when observing Himiko providing Kaon with energy, and apparently has a vindictive streak, as she punishes those of her subordinates who fail her.

Kaon  – Voiced by: Ayako Kawasumi (Japanese), Monica Rial (English)
Kaon, also known as “Kaon of the Lunar Spiral,” is the Absolute Angel Murakumo. A student from the Higashigetsu Fūma Witch Academy, she stages attacks on Kū and her friends by order of Mika, although she does not seem to feed on the energy of innocent bystanders as Tarlotte does.

Himiko – Voiced by: Noriko Shitaya (Japanese), Luci Christian (English)
Himiko adheres closely to Kaon and is one of Mika’s many lovers, although the relationship is not romantic; rather, Himiko is Mika’s subordinate in all things, with Mika using her as she sees fit. Himiko has even mentioned that her name was ‘assigned’ to her by Mika. She is based on the character Himeko Kurusugawa from Kannazuki no Miko and has been said to be Himeko’s reincarnation.

Sōjirō Ayanokōji – Voiced by: Yūji Kishi (Japanese), Andrew Love (English)
Sōjirō is the second eldest child of the Ayanokōji family. He is a muscular, heavily scarred man who can stop Kyoshiro’s sword swings and endure Tarlotte’s beatings. Whatever is said or done to Tarlotte by anyone, often it is Sōjirō who endures the wrath of her anger. Despite this fact, he seems to be the one most concerned with Tarlotte’s well-being, even providing her with energy when she falls unconscious after a battle, despite the fact that Tarlotte attacks him when she finds him kissing her to provide energy without her permission.

Tarlotte – Voiced by: Hisayo Mochizuki (Japanese), Cynthia Martinez (English)
Tarlotte, also known as “Tarlotte of the Aligned Planets,” is the Absolute Angel Batraz. Her anger lays waste to all who stand before her, but she has a childish personality and mind to go with her childish body. Tarlotte frequently has trouble finding the right words to express herself. While attacking the academy, she absorbs the life energy of the students. 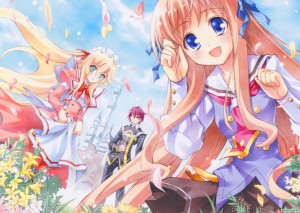 Valteishia – Voiced by: Megumi Ogata (Japanese), Robin Terry (English)
Valteishia, referring to herself as “Valteishia of the Sun and Solitude,” commands the Absolute Angel Megingjord. She has experienced death and reincarnation many times and is now using her fourth body. Valteishia is the current companion of Kazuya and his loyal follower. At Kazuya’s command, she apparently suppresses Kū’s memories of her time with Kyoshiro and stuns Setsuna so he can take her away. Also, Valteishia likes Kazuya.

Kazuya Ayanokōji – Voiced by: Ken Narita (Japanese), Jay Hickman (English)
The eldest son of the Ayanokōji family and a genius, who was involved in the experiments to create Absolute Angels alongside his grandfather. Kyoshiro believes that he sacrificed himself in an attempt to quell the great catastrophe of ten years prior to the main time line of the story. Sōjirō, however, has stated that for all his positive traits, Kazuya was a fool.

Jin Ōgami – Voiced by: Junji Majima (Japanese), Blake Shepard (English)
Jin, as the shield of order in the city of Academia, is the leader of the Seventh Public Morality Enforcement Squad. He is based on the character Sōma Ōgami from Kannazuki no Miko, but has a much less forthright personality and seems to be more concerned with the safety of Academia as a whole than the rights of certain individuals.

Kozue Satō  – Voiced by: Rina Satō (Japanese), Jessica Boone (English)
Kozue has been Kū’s best friend since they were little and always keeps her in mind. She has her energy drained from her by Tarlotte during one of the latter’s attacks on the school Kozue attends along with Kū. She has a fascination with Jin Ōgami.

Ep. 01: The Eternal Sky
Kyoshiro transfers to Kū’s class and Kū realizes that he resembles the prince from her dreams. She later encounters Absolute Angels fighting each other and destroying the school building, and Kyoshiro rescues her from the chaos.

Ep. 02: Three Gorgeous Months, a Hundred Nights
Kū begins to take in the aftermath of the school attack, but is afforded little time to catch her breath when a new girl appears and takes her away. Her captors then reveal the truth behind the beings known as Absolute Angels.

Ep. 03: The Dancing Spiral
During a morning of bliss, Kū in the midst of a quest to understand the depths of Setsuna’s emotions. Battle preparations are drawn up in anticipation of the threat of Batraz and Kyoshiro decides to bring Kū to his old academy.

Ep. 04: Fireflies of Love
After Kyoshiro was injured in a fall from a cliff, Kū tends to his wounds for the time being despite there’s nothing much she can do. Once Kyoshiro wakes up, he tells Kū about the brother he idolizes and the sacrifice he made ten years ago.

Ep. 05: A Baptismal Kiss
Kū and Kyoshiro head to the market for some pleasant shopping, and afterwards a transformed Kaon is sent to kidnap the unsuspecting girl, and new startling revelations lay out Kū’s destiny.

Ep. 06: Crossroads at the End of Dreams
Once discovering that she is the fifth Absolute Angel, Kū is all but ready to combine with Kaon which would in effect make Kū disappear. Before this can be accomplished, however, Setsuna and Tarlotte show up and battle with Kaon.

Ep. 07: An Elegy for the Wandering
After Kū is rescued, she starts to wonder what to do now that she knows she’s an Absolute Angel. She eventually tries to activate her powers, but is unsuccessful at doing so. Meanwhile, Kyoshiro is battling latent feelings for Kū despite having the desire to destroy all Absolute Angels.

Ep. 08:The Moment’s Awakening
Kyoshiro prevents Kū from falling to her death off a tower. He then confesses his love for her and promises to be with her after he takes care of Setsuna’s feelings. However, Setsuna witnesses the events and breaks down emotionally. Valteishia suddenly appears with Kazuya and interrupts the standoff.

Ep. 09: Maiden Unfulfilled
Upon reentering the world, Kazuya carries out his agenda against his own kin and proceeds to claim the Absolute Angels for himself.

Ep. 10: Bastille
Kazuya captures Tarlotte and proceeds to reunite all five Absolute Angels in a mock wedding ceremony to create the Bastille. Kyoshiro, Sōjirō, Himiko, and Jin’s squad fight their way toward the Bastille to rescue the Absolute Angels.

Ep. 11: The Angel’s Corridor
Kazuya commences the rebirth of his lovely Cielo. Sōjirō, Himiko, and Jin fight off the soulless Steel Angels while Kyoshiro races toward Kū. Within the Angel Gallery, Valteishia confronts each of the Absolute Angels about her deepest wish. The vessel for Cielo, Bastille, is reborn but rebels against Kazuya as the Absolute Angels regain their own wills. Kū is reunited with Kyoshiro and regains her memories of him.

Ep. 12: Eternal Kuu
The Bastille releases the Absolute Angels, who are reunited with their respective partners. Kazuya’s ambitions for Cielo are crushed. The destruction of the Bastille, however, costs Kū her life. Kyoshiro promises her many things to do ‘the next time around’ before all of her manna is drained away. The world returns to peace and Kyoshiro and Setsuna embark on a journey to find Kū’s reincarnation, which they do succeed in years later.