The official website for the Shimanchu MiRiKa anime project announced that a second all-new weekly anime series will air this fall. The studio Soratia has been producing Shimanchu MiRiKa as the first local anime from the southern Japanese prefecture of Okinawa. 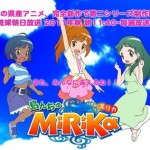