The email newsletter for Kodansha’s Comic Plus members confirmed on Wednesday that a film adaptation of Hajime Isayama’s Shingeki no Kyojin (Attack on Titan) manga will open in Fall of 2013. More details will be provided in future postings of the newsletter. 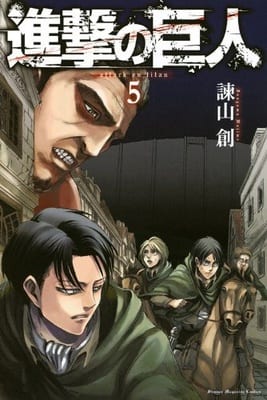 Synopsis:
The story follows the life of humans after giants suddenly appear and take over the entire world. To keep out these invaders who eat humans for food, the humans erect huge walls, but at the cost of their freedom in the outside world.

Additional Information:
Hajime Isayama launched Shingeki no Kyojin in Kodansha’s Bessatsu Shōnen Magazine in 2009. The manga has become a sleeper hit, selling over 3 million copies since last year. The fifth volume shipped in August. The official website of Itako, a city north of Tokyo, posted an October 3 casting call for extras on the latest film by award-wining director Tetsuya Nakashima (Confessions, Kamikaze Girls, Paco and the Magical Picture Book). According to the casting call, the crew is looking for 80 “healthy male and female” extras “to play people fleeing in panic from ‘giants’ who suddenly appear in a peaceful shopping district.”