Set in the Shinigami technical school for weapon meisters, the series revolves around 3 groups of each a weapon meister and a human weapon. Trying to make the latter a “Death Scythe” which is the highest title for a weapon and thus fit for use by the Shinigami, they must collect the souls of 99 evil humans and 1 witch. Maka & Soul Eater, Black Star & Tsubaki, and Death the Kid with Patty and Liz Thompson are the characters Soul Eater revolves around. Besides taking the time to gather souls, these students of Shibusen defend Death City from some of the most powerful of creatures while still attending school and trying to become stronger. 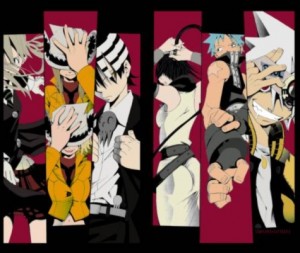 In Soul Eater, meister Maka Albarn and her weapon partner Soul Eater are students at Death Weapon Meister Academy “DWMA” for short – located in the fictional Death City in Nevada, United States. The school has many other students including Black Star with his weapon partner Tsubaki Nakatsukasa, and Death the Kid with his weapon partners Liz and Patty Thompson. The school is run by Shinigami, Death himself, as a training facility for weapons and the human wielders of those weapons, the meisters. Maka’s goal, along with the other meisters, is to have their weapons defeat and absorb the souls of 99 evil humans and one witch, which will dramatically increase the power of the given weapon and turn them into death scythes, weapons capable of being used by shinigami. In the universe of Soul Eater, witches are powerful beings and the natural enemies of DWMA, as almost all of them have a destructive nature and desire anarchy.

Shortly after the start of Soul Eater, Maka and Soul Eater face off against the forces of the witch Medusa Gorgon, who forces her child, the meister Crona and wielder of the demon sword Ragnarok, to collect non-evil human souls to transform Crona into a kishin, an evil demon god. Medusa and her cohorts attack DWMA with the intention of reviving Asura, the first kishin who nearly plunged the entire world into madness before being sealed beneath DWMA by Shinigami. Despite the combined efforts of Maka, Black Star, and Death the Kid, Medusa’s group successfully revives Asura, who leaves to spread chaos around the world after a brief battle with Shinigami. However, Medusa is seemingly killed by the meister and DWMA teacher Franken Stein in the process, while Crona surrenders to DWMA and goes on to enroll there and befriend Maka.

As a result of Asura’s spreading madness, Medusa’s older sister Arachne comes out of hiding after 800 years. Arachne reforms her organization Arachnophobia, which poses itself as a serious threat to DWMA. Shinigami calls in death scythes from around the world to aid in the fight against Arachnophobia. During this time, Medusa resurfaces with her soul in the body of a young girl, and forms a truce with DWMA so they can annihilate the threat of Arachnophobia together. The DWMA students and Medusa’s entourage infiltrate Arachnophobia’s headquarters where Maka defeats Arachne, only for Medusa to betray them, possessing Arachne’s body and brainwashing Crona into rejoining her. Meanwhile, Death the Kid is captured by Noah, an enemy posing as the former meister Eibon. Following this, Maka finally succeeds in turning Soul Eater into a death scythe, and the duo become part of the newly formed meister unit Spartoi along their friends, which successfully manages to rescue Death the Kid and take down Noah.

While the members of DWMA try to find about Asura’s whereabouts, Maka and Soul follow Medusa’s trail in hopes to rescue Crona, unaware that Crona was brainwashed and is once again her servant. Meanwhile, Crona resurfaces in Moscow and kills the death scythe that is stationed there and imprisons the entire city in a dome of black blood, which causes Soul to go temporarily insane when he comes in contact with it. Afterwards, Crona kills Medusa. Later on, Shinigami orders Maka to kill Chrona due to her destroying a city and killing a death scythe. When Maka uses her soul perception to try and find Chrona, she accidentally finds Asura on the moon instead.