New Special OVA for “Bridge to the Starry Skies” on December

The Japanese distributor Pony Canyon will release an original video anime (OVA) special of A Bridge to the Starry Skies (Hoshizora e Kakaru Hashi) on December 21. The official website of the anime also confirmed on Friday that voice actress Yukari Tamura will play an original OVA-only character. 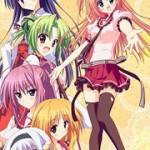 The earlier 12-episode anime adaptation of feng’s Hoshizora e Kakaru Hashi adult bishōjo game ran from April to June, and Crunchyroll streamed this anime outside Japan as it aired. The first two Blu-ray/DVD volumes of the television version shipped in Japan on July 6 and August 3, and the sixth and last volume for the television version will ship on December 7.