The media site Crunchyroll announced on Friday that it will stream the Majikoi – Oh! Samurai Girls! (Maji de Watashi ni Koi Shinasai!!) television anime series in the US and Canada starting on Saturday, October 8. 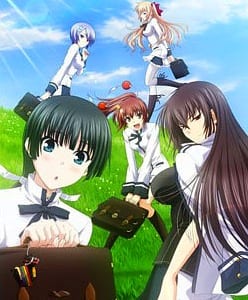 MinatoSoft’s Majikoi – Oh! Samurai Girls! adult visual novel inspired this 12-episode television anime series which premiered on October 1. Sentai Filmworks announced on September 26 that it licensed the anime for release digitally “through many outlets” starting this month. It will also release the show on home video in 2012. Director Keitaro Motonaga (Katanagatari, School Days) and the studio Lerche are animating the series. The modern-day story follows Yamato Nanoe, a boy who goes to a school that maintains the old samurai traditions, hand-weapon battles and all. Yamato’s school samurai band of three girls and four boys is thrown out of balance with the addition of two more girls.