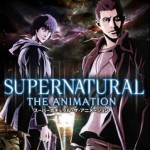 The series follows the Winchester brothers Sam (Jared Padalecki) and Dean (Jensen Ackles) as they hunt creatures and other supernatural phenomena across the American landscape. The live-action series premiered on The WB network in the United States in 2005, and it now runs on The CW. Padalecki voices Sam in the English dub of the anime, and Ackles voices Dean in the last two dub episodes. In the other episodes, Dean is voiced by Andrew Farrar.