The Last Unicorn to Return

In its latest e-mail newsletter, Conlan Press has formally announced that the 1982 animated film The Last Unicorn will be getting a theatrical re-release next year. “Starting early next year and running through the middle of 2013, there will be more than 80 special digital theater screenings of The Last Unicorn taking place in America, Canada, Great Britain, and Germany. [Last Unicorn author] Peter [S. Beagle] will be at every one of these events to do audience Q&A, meet people, and sign stuff.” 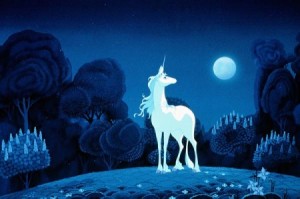 Furthermore, the film will also be getting a five-million dollar digital overhaul. “Not remastering, mind you, but renovating: going through The Last Unicorn from end to end and top to bottom, spending five million dollars to upgrade the special visual effects and soundtrack, smooth out and improve character animation, finish background paintings that were never completed, and add five to eight minutes of entirely new shots and sequences that will bring the story to a whole new level. And when the work is done, this wonderful new 30th Anniversary Version will be given a worldwide theatrical release in both 2D and 3D.”

The 1982 film was produced by American production company Rankin/Bass Productions and animated by Topcraft, the Japanese studio that animated Nausicaa of the Valley of Wind two years later.