The staff of the Tiger & Bunny anime announced during the Hero Awards 2011 event on Sunday that production on two films has been green-lit; the first film is planned for next year. The staff previewed previously unseen footage at the event. 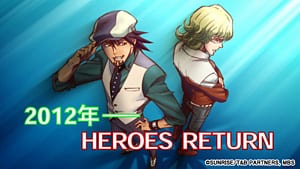 The event was held twice during the daytime and nighttime; the daytime attendees were asked not to reveal the announcement until the end of the second event, but the time that the embargo was supposed to end was miscommunicated as 8:00 p.m. (6:00 a.m. EST) instead of 9:00 p.m. (7:00 a.m. EST).

The “Hero Awards 2011” event itself will be released on Blu-ray and DVD on April 20. The event was the first phase of Tiger & Bunny “Next Project,” and the two films are the second phase.