King Records’ Starchild label announced that it will release the Blu-ray Box of the Toradora! anime on December 21 with an all-new episode. The sixth and final disc of the box will feature the new episode along with the super-deformed series Toradora! S.O.S. ~Kuishinbō Banbansai, and the Toradora! Taikenki series with the cast. Starchild promises to provide more information about the new episode later. 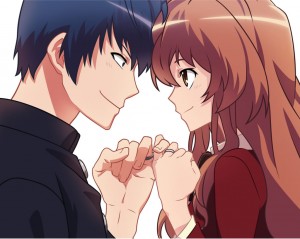 The first five discs will contain the 25 episodes of the television series in Japanese with no subtitles. The video will be in 1080-progressive high-definition resolution, and the audio will be in linear PCM stereo. According to Starchild, the video will use Sony PCL’s new upconverting service “Real Scaling for HD.” The box will also bundle a booklet with the contents from the DVD archive booklet, new interviews, and a collection of licensed artwork. The box will sell for the suggested retail price of 39,900 yen (about US$520), but many retailers will discount the price.